For years, Tania Kross (Curaçao, 1976) has been reckoned among the best mezzo-sopranos in the Netherlands. After performances in, among others, Amsterdam, Paris, Salzburg, Vienna and New York, she will finally perform again in her native island. It will be a special concert by local artists and musicans, returning to Curaçao especially for this concert before the Curaçao North Sea Jazz.

She will not just perform herself, Tania Kross will also share the stage with three young, upcoming talents from the island; Junior Tecla, Maruja Bogaard & Veanira Reed. Together, they will present a mix of soul, funk, and jazz music styles, which promises to give rise to a very special, varied evening. A band led by none other than Eric Calmes will be accompanying all artists. The smalltown, warm feeling created by the idyllic Octagon Square at the Avila is bound to create a marvelous experience.

DushiDeals is the online discount site where at least 50% discount on tickets, hotels, Curaçao Tania Kross, wellness, spa, paintball, nails and much more. Every day is a spectacular deal online. Make sure you buy within the time, otherwise it is closed and you can not buy him! Surf to www.dushideals.com, sign up for free and buy these great deals! 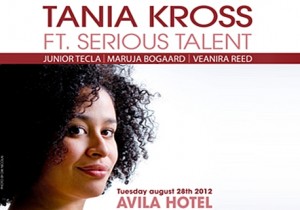